If you are squeamish, a vegetarian or prefer to see your meat wrapped in plastic in the supermarket, then please stop here. There are graphic photos following the article, which may be too much for some. If you’re not bothered, however, thank you for reading.

When I was about 10 years old, I watched a man shoot a calf. I stared curiously as it slowly succumbed to its death, left alone in a pen by the back door of the slaughter room at the butcher shop where my grandfather worked. It was sad, but I was more pensive, from what I remember. An hour or so later, looking for Pawpaw, I opened the front door of the slaughter room just in time to see the large slicer stab through the neck of the hanging animal writhing around sucking up its last bits of hope, blood crashing to the floor. Just then, Pawpaw grabbed my shoulder and pulled me away. “You ought not be in here.”

Yesterday morning, at nearly 44 years old, I attended my first full-day boucherie at Vermilionville in Lafayette, Louisiana. Nana said she went to “so many” growing up, but it wasn’t for fun, just because that’s what they did. It’s an age-old family and community tradition using the entire hog, from snout to tail, and no, not a fancy new culinary trend.

A large stick of sage, after being passed around the cage, sat burning strongly … next to the pistol. At approximately 7:30am, the French prayer began its solemn hum. Silence. In a surprisingly loud bang, the bullet then shot through the skull of the swine sending it into a fury fierce enough to burst through the pen wall. It wasn’t going down without a fight. They say some go much more peacefully than others, some are more trusting right of the bat. Not this one. The fiddle bow slid back and forth in time with the plunging knife. Finally, it gave in. The bright red liquid flowed freely into the stainless steel bowl. At its last drop, the animal was hauled off to a wooden table displayed in the center of the square, and washed down before being draped in scalding burlap and splashed with more water, hot enough to ease the sheering process that would follow. Led by the Lâche Pas crew, a team of locals, professionals, amateurs and New Orleans cooks, scraped off every last bit of hair. The butcher began with a slit down the back, then the head, the trotters, etc., until finally each and every part was whisked away to its proper station to be turned into boudin, gratons, ham, fraisseurs (organ meats), hog’s head cheese, chaudin and backbone stew.

Is it bad that just after the killing, I got a craving for boudin? Does it make me heartless, numb or accepting of my Louisiana culture? Is it odd that rather than becoming a vegetarian, I am instead more conscious of the living and dying conditions of the animals I eat and now only want to eat the meat I’ve already met or at least have made peace with? And how long will this last?

Because of Louisiana laws, you’re not allowed to buy alcohol before 11am (ish) on a Sunday, sometimes hard liquor until after noon. But this morning, the moonshine and Jameson bottles were passed around, though Guy waited until 10:30 for a beer, and I until 11 for a Jack & Coke. No, there would be no acceptable brunch Mimosas this morning. But the morning’s events definitely called for a little liquid courage. Within an hour or so, we were all socializing, meeting new folks and patiently awaiting the day’s provisions.

Nana said they shouldn’t have shown the killing in public, that she never had to see them do that. Although that particular part of the process isn’t something I’d necessarily want to see again, I am glad I was there for it. It is key. And it’s important to know that death, even when violent, does exist. And as Guy says, praying over it doesn’t necessarily help the pig, but it comforts our conscience. It brings something sacred to the table, aside from just a slab of pork. 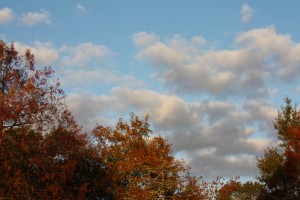 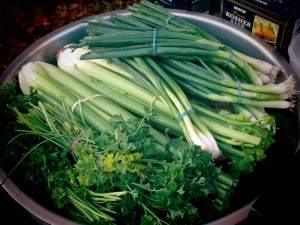 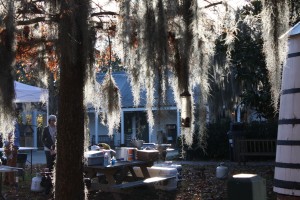 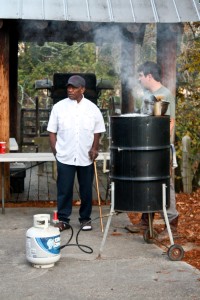 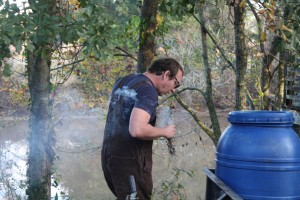 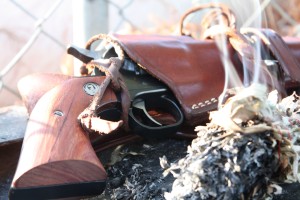 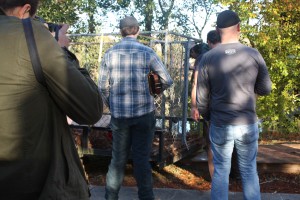 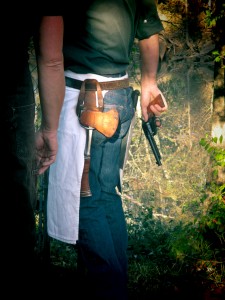 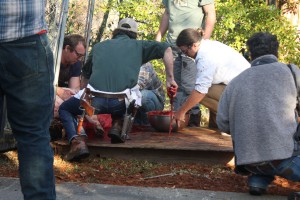 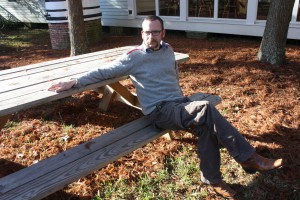 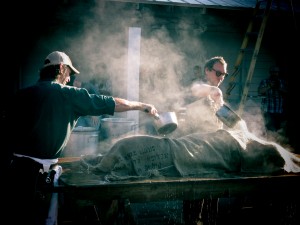 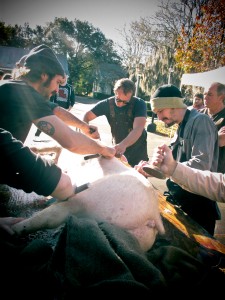 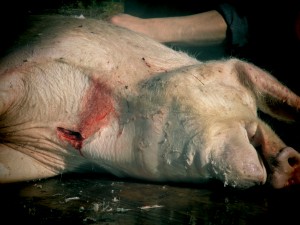 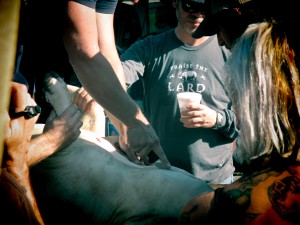 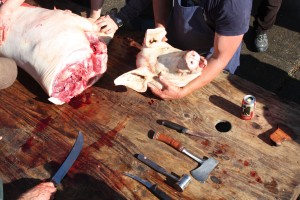 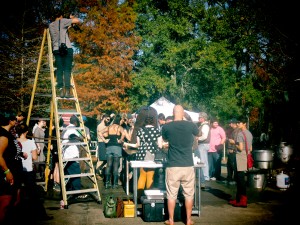 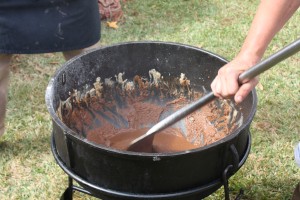 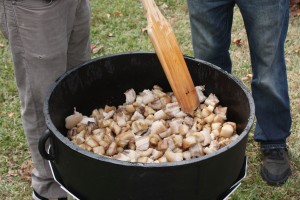