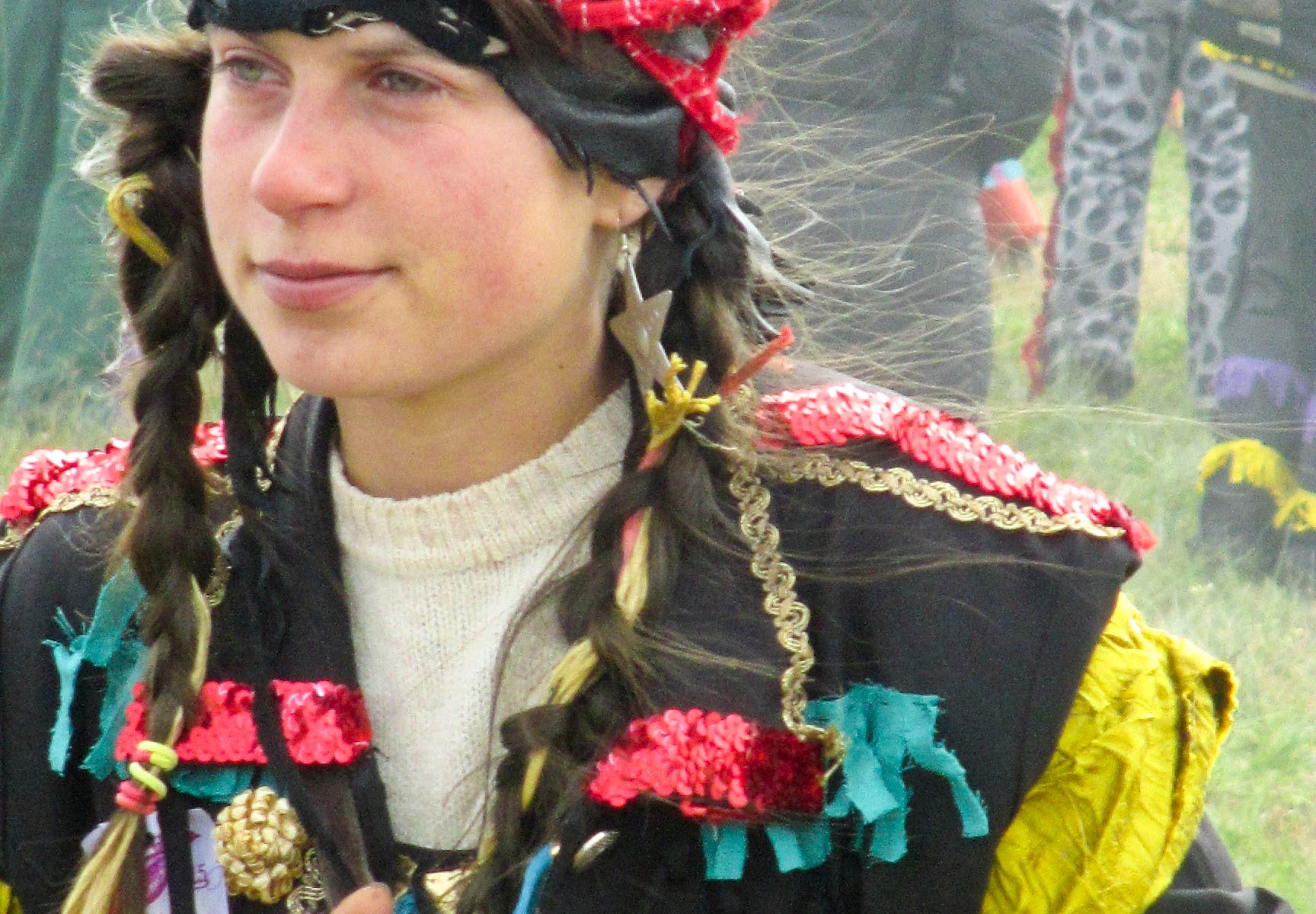 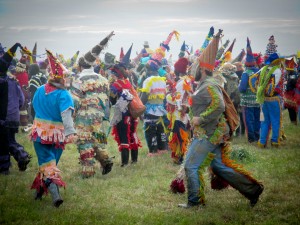 Drizzling rain along the dark, winding country lanes of Louisiana 758 toward Savoy, Louisiana, the night brings me to a parallel spot in-between a rental car and a pick-up truck. The large white tent glows back in the field. It’s muddy out, and cold, probably in the 30s, but I think I’m prepared – wool tights, thermal undershirt, off-white/old-man jumpsuit, Hunter wellies, puffy down coat, flask of Four Roses and a bottle of ginger beer. I’m not good at camping. I bring everything, but a cup and a towel. The next day I consider investing in one of those electric sticks that heats up water, one that fits into the cigarette lighter plug. But that would mean drinking instant coffee, though I could drink tea, and I don’t think the ciggie plug works anyway, so there’s that.

I make it down the muddy lane, flashlight in hand, past the Porta Potties, and see Bird already grilling up sausages for the hot dogs. Folks have gathered together, drinks in hand, ready to dance the evening away to the Caleb Klauder Country Band. It’s Lundi Gras, the eve before Mardi Gras. And we have all been invited to celebrate this Faquetaique Courir de Mardi Gras.

I have no idea what I’m doing. Born and raised in Louisiana, I always new about the Courir de Mardi Gras, but never really attended the whole shebang, either because I wasn’t part of a community that ran, because I thought it was only for the men, because I was too young, because it was too cold or because I didn’t live in the area. This year wasn’t going to be any different – too cold, no traditional duds, let’s see what other excuse I can come up with. But when a friend lent me a costume complete with matching top and bottom, mask and capuchon, I couldn’t refuse, even if it meant sleeping – or not – in my car on a 25º night. Yes, that’s what I did. And although I managed to stay warm, that part still sucked. I’d love to think my gypsy ways include an ability to sleep anywhere at any time, under any circumstances, to swig whiskey at breakfast, chop wood, build a completely sustainable tiny house, write several novels (or finish one), paint masterpieces, speak five languages, add singer and musician to my CV, become a master filmmaker and whip up a gourmet dinner for 20. Ok, maybe I’m getting carried away. So instead of conjuring up my inner Martha Stewart-meets-Ann Wilson-meets-Gertrude Stein-meets-Agnès Varda, I started with making it to this Courir.

Exhausted, cold, in desperate need of coffee, and scared to death of being whipped and thrown in the mud, I pull on four layers of clothing, don my costume and emerge from the back of my Chevy Malibu. About 300+ people are gathered in and around the tent, while the Capitaine initiates the newbies who kneel down, are lightly flogged and then doused with whiskey. The rules are set. Allons-y!

This style of Mardi Gras celebration, completely different from the one in New Orleans, dates back to Catholic Medieval Europe and Celtic traditions where disguised merrymakers would travel from house to house begging and performing for food. Flogging and drunkenness fits in there too, having to do with sin and repentance, which have greater meaning the following day, Ash Wednesday, and kicks off Lent. You may have gotten a taste via Treme or True Detective, or perhaps through Pat Mire’s film Dance for a Chicken: The Cajun Mardi Gras.

Since moving back to my home state of Louisiana about a year-and-a-half ago, I’ve been able to dig up a few roots, start making peace with the past and discover a colorful mix of ancestry from the Pelican State, Tennessee, Indiana and Nova Scotia on over to Scotland, France, Spain and Italy mixing names like Price, Stewart, Reubelt and McGraw with Charpentier, Savoy, DeVille and Jeansonne. It’s been interesting, to say the least, and a process I seem to have been escaping or ignoring most of my life. Each day, something new pops up. Whips and muddy pits have nothing on this new adventure. But, I digress.

From 8am until about 3pm, the walk/ride/run trails on, intoxication growing while participants chase chickens, climb up a greased pole, sing, dance, eat boudin and really delicious sausage sandwiches and then pay homage to Dennis McGee – with a special appearance this year by Wayne Toups – and finally end up back at the tent for gumbo.

As a participant/observer, I find one of the most interesting things to be the masquerade. There are a few people here and there that are recognizable, especially to those who come each year, but for the most part identities are concealed, which can be good for hiding out, but a pain when you’re really curious and just want to know who’s who. But that will come in the end.

I have a few things going against my cutting loose, however. I don’t like to get wasted. I don’t like to get muddy or be flogged. And I hate being cold and tired. So even if it’s part of my culture, one might say I was out of my element. Or maybe just call me a boring old fart who just needs to lighten up and let loose. It’s supposed to be a time to escape who you are, let yourself get a little (or a lot) crazy and come together with your fellow revelers. But even as a grumpy Gus, I can tell you that it was a treasured experience. It’s a beautiful, ever-growing community, and being a part of it brings me closer to my racines, closer to understanding who I am.

“I remember my first Mardi Gras run. I musta been about … ummm … I don’t know … 11 or 12, or somethin’ like that. The men rode horseback. And the children followed in a line behind ’em. My daddy was the Capitaine back then. In Pine Prairie. The women didn’t run. They stayed home taking care of the smaller kids and always had things to do, because they didn’t have washing machines then. The men would take the chickens, and the children would carry the rice and other things the neighbors gave ’em. But the men didn’t drink back then. You just didn’t do that. I remember Uncle Marion came home once from drinking. And that probably meant just a little ole bit. And Mama brought him home and laid him out on the porch. She wouldn’t let him inside. Every once in a while, she’d poke her head out the door, and ask, ‘Marion, you want some coffee?’ And he’d holler back, ‘hell, no’. Hahahaha. You know, ’cause coffee would sober him up. She kept asking him, every once in a while. And he must have gone back inside at some point in the middle of the night. They didn’t drink back then like they do now. They mighta put him outta the church for that, or maybe he just didn’t go back. But we didn’t have as much fun as y’all. We didn’t get to run and waller around in the mud holes. We missed out. Hahahahaha.” – Nana

I did it, survived and can now warm up at Nana’s with chamomile tea and lemon cake. Thank you to my ancestors. Thank you to my family. Thank you to my community. And many thanks to Joel, Wilson, Linzay and the gang, to Bird for the great hot dogs, the villains for not flogging me or throwing me in the mud, to Jim and the Pas Bon bus for giving me occasional trailer rides, Caleb and his crew for the fantastic tunes, and Frank for encouraging me to attend and even finding me a costume. A l’année prochaine … 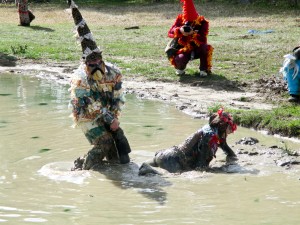 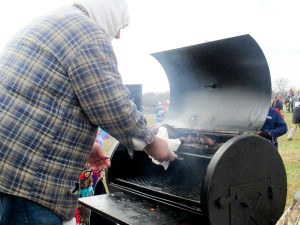 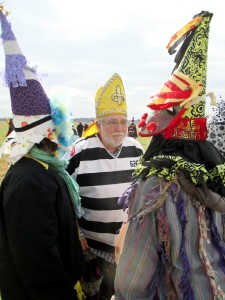 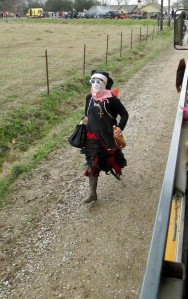 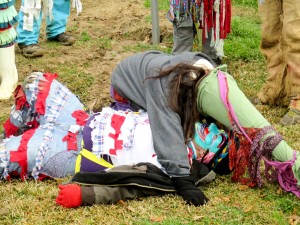 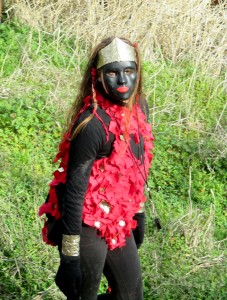 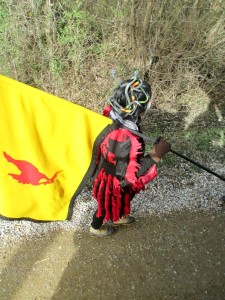 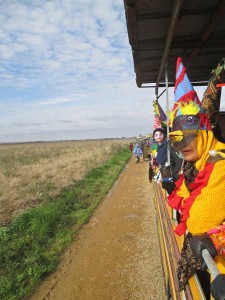 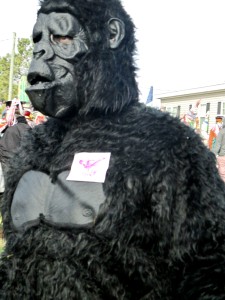 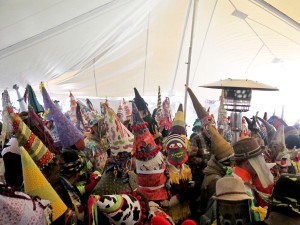 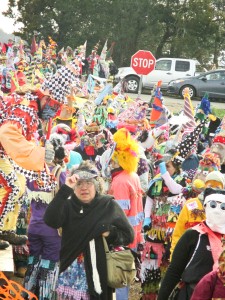 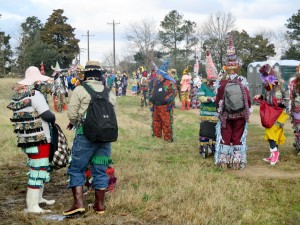 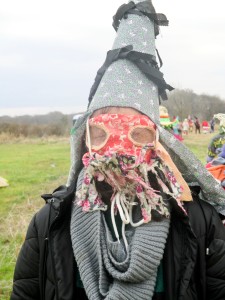 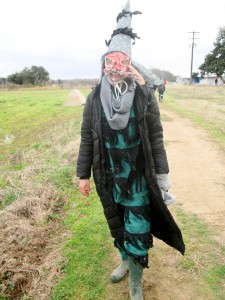 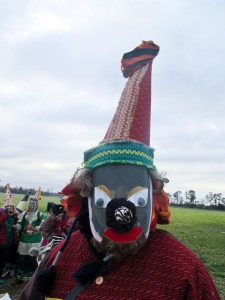 A few extra pics from Saturday evening festivities at the Blue Moon Saloon.

Relaxing with tea and lemon cake