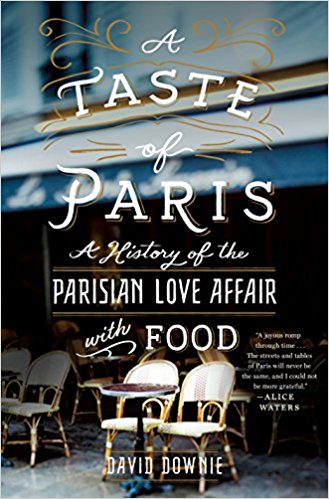 “It’s just as important for a gourmand to know the strengths and weaknesses of his stomach as for a general to know the morale and strength of the army he commands.” – Grimod de la Reynière

If any of you know me, or have read my previous writings, then you’re aware of my love/obsession for Paris. It all started when I was 16 during a high school trip. I’d fallen for a Scotsman in London, but once I stepped foot in Paris, my heart belonged to the City of Light.

It’s been quite a few years since then, and I still long to return to my beloved Paris. However, my last couple of visits made me wonder if things weren’t veering into the meh lane. And that’s just sad. It’s Paris! Parisians don’t walk around shoveling food into their mouths on the fly. Parisian restaurants use only fresh ingredients and make the best dishes in the world! And all French people are great cooks and have healthy diets. Right? Um, non.

From learning about the universe’s culinary wonders (thanks Mom!) and working in the crazy cooking world, I have tasted too many delicious dishes to dare put up with mediocrity. That’s not to say that I don’t eat shit, or malbouffe. I have been known to enjoy a Big Mac from time to time, and my all-time vice is ooey-gooey Ro-tel cheese dip.

But noooo, David Downie has succeeded in crushing my Parisian delusions … sort of.

When you and I last met, I was telling you about my diet (I finished it, feel better, and am still drinking gobs of water and chewing my food well). I also mentioned a book I was reading, “A Taste of Paris: A History of the Parisian Love Affair with Food,” by David Downie.

This well-researched romp leads readers through the history of Paris’ eateries and dining etiquette. Mr. Downie’s chapters are interestingly divided and written in a fairly casual manner as if he’s recounting a tale right as you’ve pulled up a chair to his table at the local Paris bistrot. Some parts made me hungry, while others made me cringe. There’s no amount of shyness in his disdain for “karaoke cooks” and the latest hipster infestation as well as the city’s less-than-average famed culinary haunts. It is also obvious that he is well-read and educated as his smorgasbord of information comes sprinkled with lofty words; I even learned a couple: transmogrify and excogitate for instance. Yowza!

With a facetious bite, he takes us on a time machine unveiling the truth behind molecular-ish gastronomy, restaurants and dishes Parisians like to call their own while assembling main players from the royals to big cheeses including Carême, Brillat-Savarin and Curnonsky. Grimod de la Reynière’s parody of a resting-doll meats recipe called Rôti sans Pareil reminds me of Louisiana’s darling Turducken. And the nobility’s distasteful lack of table manners recalls scenes from La Grande Bouffe. I’d be interested in finding out what his Paris, Paris tours are like, and to hearing these stories while seeing each spot in the flesh. Because frankly, snarkiness aside, he had me at fishmongers, chestnuts and tooth-staining wines, only losing me for just a sec at the anthropophagy section. Ew!

Yes, I was disappointed to learn my starry-eyed idea of Parisians and their elegant history, and present, wasn’t exactly as I’d dreamed. But in saying that, I am thankful for the truth. This historic buffet is peppered with eateries and food-related spots I’m eager to taste during my next sojourn to Paris, from the Mazarine Library and Place Dauphine to the Musée Nissim de Camondo and La Petite Chaise, among many others.

In the words of Mr. Downie, “where else could I live and write but Paris?” Sooooo, while I work on that one, we should all get over our delusions, pour ourselves a French cab, snuggle up with a tasty read on the history of Paris’ love affair with food and really learn what it means to faire bonne chère.

“Paris keeps watch from her towers and, with her sewers, digests the monstrous nourishment described by Balzac, from which she draws her strength and her enchantment.” – Jean Cocteau

“A meal without cheese is like a beautiful woman with only one eye.” – Brillat-Savarin