One of the biggest inspirations France gives me is cooking/eating. On that note, tears of inspiration filled my eyes recently while walking down my old Paris neighborhood’s Rue Daguerre. During my short week’s stay, I made time for cheese shopping on a Friday afternoon, on the hunt for the perfect morsels to add to the evening’s soirée back at my friend’s house in Colombes. As I wobbled my aching tootsies down the narrow street, I leisurely glanced left to right at the butcher, fish and wine shops, exchanging smiling eye contact with the shopkeepers and well-suited just-off-work businessmen. Bonjour! Does it get any better’n’is? Why oui, actually, it does. Stopping at the outdoor cheese stand, Fromagerie Vacroux, I had no idea what to choose (there are hundreds), though my heart always calls out for a vieux cantal. Although I often stand back out of shyness, the cheesemonger quickly zeroed in on me with a convivial, “bonjour madame, comment puis-je vous aider?” Oh dear. Quickly quickly, get that French into action. You know it’s in there. I love speaking French, it feeds my soul. And although I’ve been told I sound like a native, I am still fairly withdrawn in my vocabulary. But in this moment, I was too excited with that chez-moi feeling, and just let it flow. Unfortunately, the cantal they had was too young and soft for my palate, but he did offer a taste of Comté with tiny crisp salty bites that knocked my socks off. Toto, we’re not in Louisiana anymore. Add to that an ashy chèvre, and I was in heaven.

I strolled another block, but realizing I had to meet Emily in mere minutes at the Gare St. Lazare, I said adieu to one of my favorite streets in all its alluring sights, sounds, smells and attractive people and headed for the metro. Oh, but of course I had to stop for a few bio croissants at the Moisan boulangerie for the next morning’s anticipated late breakfast. I’m home, James, I’m home! The cheese was a hit, especially the Comté, which my friend Laurent’s neighbor Etienne and I shared in large chunks, both slightly weepy at this point. Not sure if it was all the wine or because the Comté was so incredibly delicious. Didn’t matter. We were super happy campers, and to hell with the rest of the world as long as we had good wine, exceptional fromage and great company.

And here I am back home, where heavenly cheese is in short supply. And where I sit while my friend back in Colombes teases me with WhatsApp pics of the Perle de Lait I left behind. Ooooh la la. But the lack of délices will not get me down. 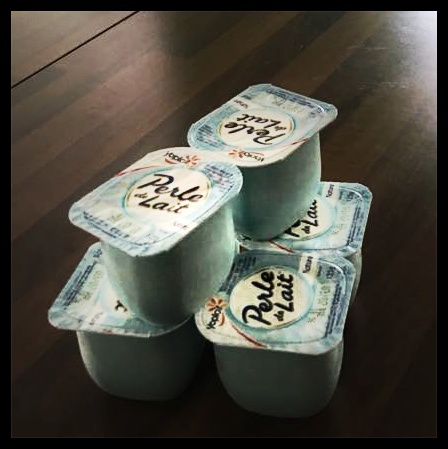 Last night, I was invited to a lovely soirée by some precious Parisian friends in town, the wife of which plays in a local salsa band. I am a sucker for a cooking/sharing opportunity, so I put all that French inspiration into action and decided on gougères stuffed with a cheesy walnut cream and chopped tomatoes, arugula and fennel.

For the creamy, cheesy filling, I mixed (jtm Trader Joe’s!!) some cream, goat and blue cheeses together with one smashed clove of garlic, a splash of milk and some crushed walnuts and herbs. I am so in love with France’s not-so-fancy Rondelé aux Noix de Dordogne, and was wishing for some, but what I made came out pretty great, so pas de soucis.

For the gougères, I tweaked Mimi Thorisson’s recipe a little. Because I didn’t have all-purpose flour, nor wanted to go out and buy it, I instead used half bread flour and half buckwheat flour, which I had on hand. Yeah, odd, I know. Why in the world would I have those flours on hand, but not good ole all-purpose? Oh, because I used them only once or twice and there they sat abandoned in my cupboard. But I figured since bread flour has a lot of gluten and buckwheat has none, they would balance each other. Look at me gettin’ all food-nerdy! I also used some Parmesan and Gouda I picked up at T.J.’s on the drive back home instead of the Emmental/Gruyère. I don’t usually like to alter baking recipes too much since it’s easy to fail if you don’t follow the recipe explicitly. And it’s so depressing/costly when you get excited about a recipe only to have to throw it out because the least little thing was off. But this time I took my chances and it worked! In the words of the great Colonel John “Hannibal” Smith, “I love it when a plan comes together.”

And, thankfully, it was received with much approval by the international party crowd, with one even saying it reminded her of the precious and pricey choux à la crème her dad used to buy her in Belgium, albeit mine were savory. Yay! 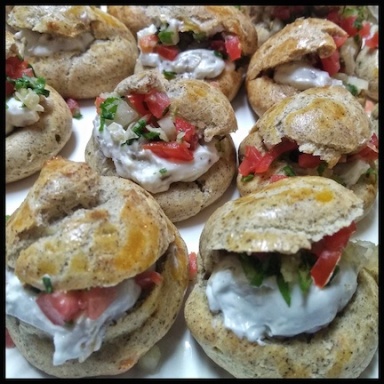 I would encourage you to come up with your own creamy mix, and feel free to play with different flours keeping in mind the amount of gluten in each. I also just found another great recipe for Roquefort and Walnut Gougères in Mimi’s book A Kitchen in France, which I am looking at right now this minute. Next time. So when we don’t have the time or money to pop over to our beloved France, at least we know we can find fairly simple ingredients (even cheddar and beer!) to make up our own French-style goodies. A gal can dream. Bon appétit.

2 thoughts on “I Love it When a Plan Comes Together”